Perhaps you have wondered about the origin of the circular bands that adorn the fingers of couples around the world. What started this lovely tradition between a bride and groom?

Wedding rings are beautiful expressions of eternal love. The circular shape signifies an everlasting bond between a bride and groom as they promise their lives to each other. The exchange of rings mirrors the deeper commitment “till death do us part.” In the 13th century, Bishop Durant proclaimed this tradition to represent “a symbol of the union of hearts.”

In ancient times, Egyptians would tie together grass reeds and string them on fingers as jewelry. Eventually various materials and metals were used such as leather, ivory, bronze, pottery, and gold. The wealthy of society could afford to use an expensive coin to melt into the shape of a ring.

From what we know, Egyptian culture was the first to record the exchange of rings at a wedding ceremony. Later in history, the Romans used rings between wedded couples to represent a man’s “claim” on his wife. In other words, when you see the ring, she’s taken. Don’t mess with her, boys.

In ancient Italian culture, a betrothed couple would wear “fede” (meaning “faith”) rings. These were three separate bands: one for the bride, one for the groom, and one for a third party witness. At the ceremony, all three bands were interlocked to form one ring for the bride. The outside bands were tiny hands that linked together with a heart shape in the middle…as the hands clasped each other, they protected the heart in a delicate display. 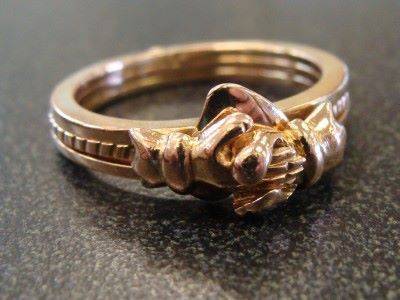 Another similar style developed in the sixteenth century in Europe called the “Gimmel” ring. Originally from the French word “jumelle”, meaning twin, these rings were two flat hoops that fit together like a puzzle. One was for the man and the other for his sweetheart. At the ceremony, they were sealed together and given to the bride as a symbol of faithful devotion.

No one quite knows when men and women began wearing their wedding bands on the third finger of the left hand, but it soon became an important part of Western culture. The Latin phrase “vena amoris” (meaning “vein of love”) refers to the myth that a major blood vein ran directly from the left ring finger to the heart. Even though modern science proves otherwise, this tradition seems to stick. Perhaps a more practical reason for using this particular finger is because it is less used than other fingers. Obviously, keeping an expensive ring safely guarded on the left hand is most practical in a world of predominately right-handed folks.

While wedding rings come in a wide array of various metals and precious jewels, diamonds remain the most popular choice for couples. Ever since the early 1940’s, De Beers has maintained their slogan that “a diamond is forever.”  No wonder these stunning jewels represent the love and commitment of a bride and groom!